The Bocuse dOr Winners join Paul Bocuse to celebrate his 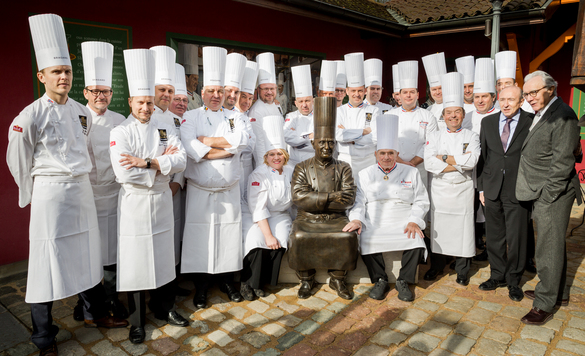 A tribute, a testimonial

Today, February 11th 2016, the Bocuse d’Or Winners chefs were in Collonges-au-Mont-d’Or, at the restaurant on the banks of the Saône where Paul Bocuse was born 90 years ago. They had come in large numbers to show their admiration and affection for this exceptional human being, talented chef and creator of the contest that bears his name. The Bocuse d’Or was launched in 1987, and will celebrate its 30th anniversary next January. Since then, all the chefs who have climbed the podium have had the honour and delight of seeing their names engraved at the entrance to the restaurant, a strong symbol of Paul Bocuse’s attachment to an event now viewed as the toughest and most prestigious culinary contest in the world.

To mark the anniversary, the Bocuse d’Or Winners chefs presented their mentor with a gift: a statue inaugurated on this occasion in the restaurant’s courtyard. The statue is a duplicate of a sculpture commissioned by the City of Lyon from artist Thierry Portier, which now presides at the Tourist Office, in Place Bellecour, Lyon.

Donation of the work of art was personally financed by the chefs (without using association funds), emphasising their desire to express their gratitude and admiration to Paul Bocuse.

The inauguration was followed by a family-style meal, without cameras or journalists, respecting Paul Bocuse’s desire to experience the day in a calm and intimate atmosphere. Alongside the chefs: the Mayor of Lyon, Gérard Collomb, and Olivier Ginon, both very much attached to the Bocuse d’Or, a contest that flies the city’s flag high.