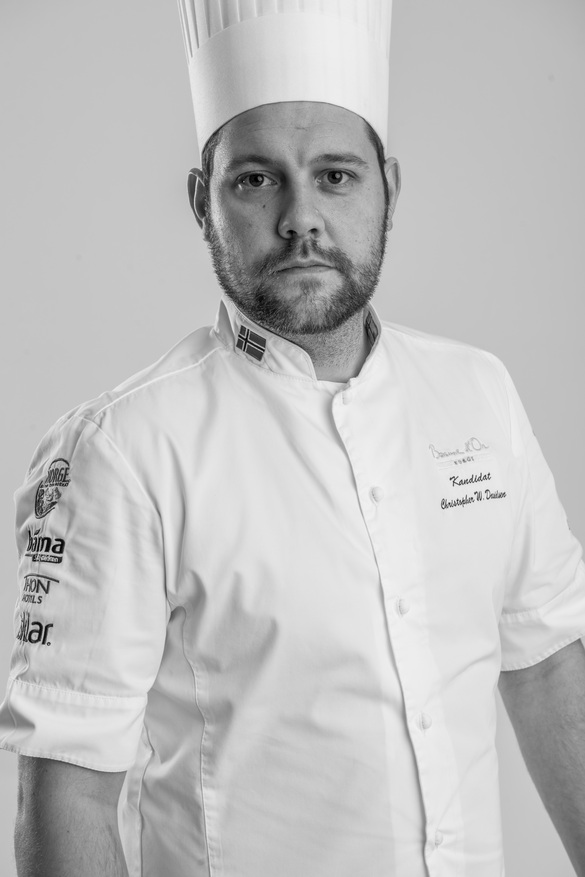 A native of Stavanger, the Norwegian city famous for its Gastronomisk Institut, Christopher Davidsen has lived in Trondheim since 2015 and had very good reasons for setting up there: his engineer wife, Siri, his two daughters Hedda and Amalia, and the four establishments he is in charge of: Søstrene Karlsen (bar and simple cuisine), Kalas & Canasta (traditional cuisine), Almas (French-style bistro) and Caya (gastronomic restaurant of Nordic influence), not to mention his company CWD Catering. Yes, Christopher is relentless in his work! A profession he loves and a family who matter a lot to him: he is a happy man. He appreciates being able to try out different styles of cuisine, but spontaneously he is most drawn to traditional cooking, and not just Norwegian either.

His professional path has enabled him to work with Odd Ivar Solvold and Sven Erik Renåå. For the Bocuse d’Or, Gunnar Hvarnes (Bocuse de bronze 2011) was his coach. Gunnar describes Christopher as a great perfectionist who watches over everything and is extremely resistant to stress, important qualities for anyone aiming to climb the podium at the contest.

Recruited by the sublime Hotel Britannia in Trondheim, he is awarded a Michelin star in 2019.

Attracted to a career as a soccer player for a long time, Christopher finally opted for the profession of chef; these days, he’s happy just watching matches and being an ardent supporter of Manchester United! When he has free time, he’s drawn to water: boating and fishing resonate with his Viking blood.