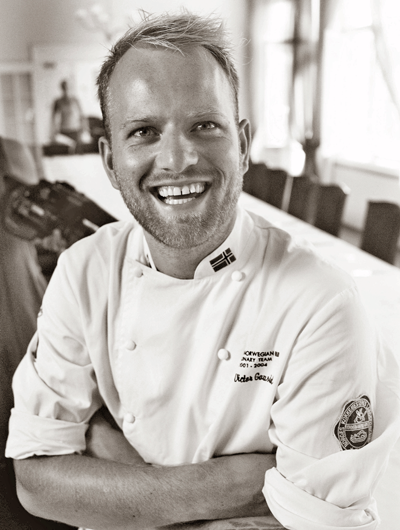 It could be said that Tom Victor Gausdal fell into the “magic cauldron” of competition from the earliest age! He started out as an apprentice at the Statholdergaarden (the restaurant run by Bent Stiansen, Bocuse d’Or 1993) and then, several restaurants later, he was assistant to Odd Ivar Solvod when he came to Lyon to win the Bocuse de Bronze in 1997. Tempered by the rigours of Norwegian sport from the outset, his victories began when he was voted Best Chef of the Year 2000 in his home country, and Chef of the Year in 2003, before stepping onto the podium of the Bocuse d’Or 2005, just one point behind the winner. In Oslo, he invests his energy, creativity and team spirit (with three partners) in Flavours, a company which, as well as offering decidedly modern and innovative catering and delicatessen products, provides a variety of consulting services: culinary design, cookery lessons, and so on. In summer 2010, he opened a new location: STRAND (the beach) in Oslo: a restaurant with a warm ambiance, featuring seminar and party rooms… and a bakery, all situated on the very edge of the Oslo fjord. It is located in a pleasant, green area by the sea. In November 2012, he opened a new restaurant downtown: Smalhans. In 2014, he started Hitchhiker, a delightful concept based on street food from across the world.

Next came Sentralen, a restaurant, bar and cafeteria located in a cultural centre, Brutus, a wine bar serving natural wines, and 3 Handwerk bakeries, specialised in sourdough bread. Nowadays, he and his partners manage a total of 13 establishments.

Tom Victor still finds the time to write books and take part in TV programmes, particularly as a member of the jury in the Norwegian version of Master Chef!