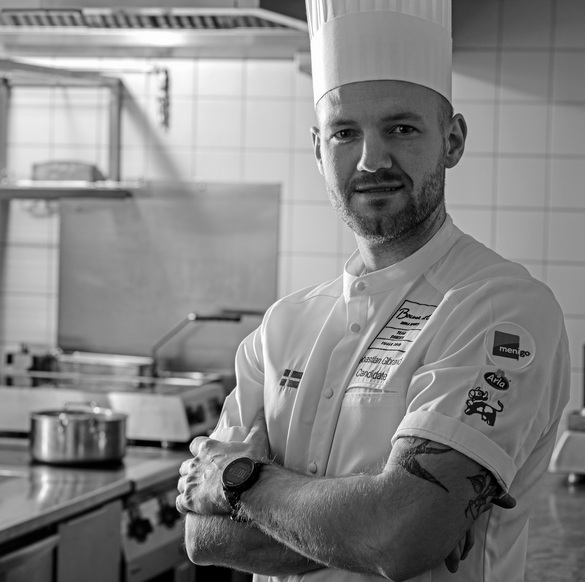 It all started with a grandmother who was an excellent cook (and a magician when it came to baking), who loved to show little Sebastian how enjoyable cooking can be. For his part, Sebastian realised from the age of 10 that, beyond the amusement aspect, he was engaging in an activity that made him happy, which was really “just for him”! He was a very good student, and his parents, who are absolutely not in the trade, dreamed of him getting an academic training. When he announced that he wanted to become a cook, the reception was more than cool… He finally convinced them to accept his choice by promising to become one of the best chefs in the country. He initially cut his teeth in restaurants in his home town, Helsingborg, then arrived in Stockholm where he became a line cook at Oaxen, then chef at Frantzen, the most renowned restaurants in the capital! Joining the Swedish cooking team, which he would be captain of for several years, enabled him to discover competition and travel, two activities that he adores… And he fell in love with the USA, and particularly San Francisco.

In 2014, he was entrusted with the creation of the starter for the famous Nobel Prize dinner: a crab terrine in lobster jelly with langoustine soup. Now an independent chef, he finds satisfaction in a variety of services, particularly in coaching missions, which he trained for. But for the Bocuse d’Or, he called on Tommy Myllymäki to coach him. He dreams of opening his own restaurant down the line, probably a place where he would offer an affordable local cuisine, based on his mastery of French technique, but drawing from varied influences, since he likes to give free rein to his creativity and not be confined by styles or trends. For now, he has set himself the goal of competing once again at the Bocuse d’Or and climbing a step higher up the podium: the only one valid in his eyes… He has also signed up to take French classes so he can make the very most of the experience, in a country he really loves, for one thing because he has a passion for wine.