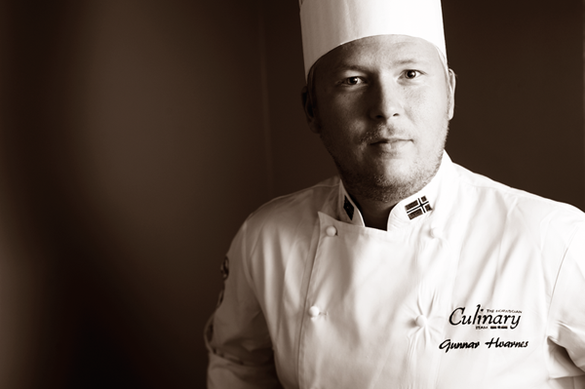 Gunnar Hvarnes is the eighth Norwegian to mount the Bocuse d’Or podium. A fine achievement for this chef whose first experience in the world of cooking was as a dishwasher in the kitchen of a ferryboat between Norway and Sweden! He started out as an apprentice in a hotel in Gaustablikk, a popular ski resort in the mountainous Telemark region, then began working in various Norwegian restaurants. Gunnar’s time at Bon Lloc, Mathias Dahlgren’s first restaurant in Sweden, had a lasting influence on him. Dahlgren is one of the leading lights in the Scandinavian “philosophy” of Nordic cooking that draws from its own roots and strives to achieve a simple and natural quality. The Nordic influence and his training in French cuisine (including with Bocuse in 1997) have made Gunnar Hvarnes a well-rounded chef with a solid foundation. Since 2006 he has worked at Hos Ingrid (Ingrid’s), at the well-known Gastronomisk Institutt in Stavanger. Then he prepared for the 2012 opening of the Spiseriet restaurant (in the magnificent new concert hall in Stavanger). Of course, he is also a member of the Norwegian Culinary Team, a preparatory school for the Bocuse d’Or, a competition that he sees as the “ultimate challenge for a chef” and nowadays he is delighted to be the coach for the national team!