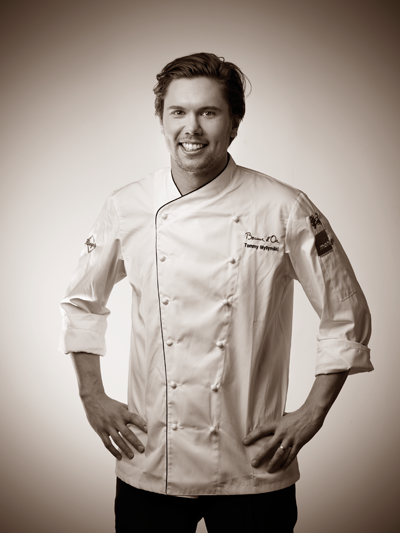 Tommy Myllymäki undeniably belongs to the young generation of Swedish chefs who have travelled and experienced various culinary traditions but are eager to develop Nordic cuisine, which is increasingly rooted in its environment: simple, direct and self-evident, highlighting vegetables and nature. His grandmother Kerttu’s cooking inspired his passion for his future profession and rooted him in the kind of rustic traditional cooking that delights the palates of diners at Julita Wärdshus, his summer inn in the Södermanland region. Tommy is very open-minded and cherishes this fantastic gastronomic memories of tasting dishes by Pierre Gagnaire, Alain Ducasse in Monaco, Régis Marcon, and so on. Since his success at the Bocuse d’Or, he has been solicited from all sides; beneath the surface of this calm man with an actor’s physique lies a real talent for communicating, and Swedish TV was quick to turn him into a star of the small screen, cross-crossing the country highlighting local products in the form of spontaneous culinary creations that are helping to give the Man in the Street a desire to cook. In December 2012, he opened a new restaurant in the town of Jönköping: “Sjön”, or Lake in Swedish; an establishment that he conceived of as simple, serving a cuisine within everyone’s scope. In 2018, he closes Sjön, heading towards new projects… March 2020 will see the opening in Stockholm of his restaurant Aira. Despite the intense work, he finds time to run every day, a passion that he shares with his wife Malin, a designer.