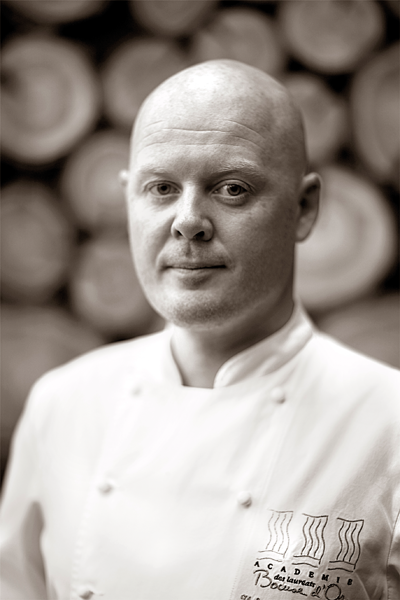 His rise to the third step of the Bocuse d’Or podium came as a surprise to some! How could this windswept island at the northern tip of Europe, in the middle of the Atlantic, produce such excellent chefs? That’s forgetting that Hákon Már Örvarsson, a chef fuelled by passion for his trade and trained at the Iceland Hotel School, comes from a country where people like to produce the best out of simple, top-quality raw materials. He began his career at the top, at the Holt Hotel in Reykjavik, part of the Relais & Châteaux chain, before leaving to train for the Bocuse d’Or with Léa Linster, and it would be hard to find a better place to train. He went back there after winning the Bocuse de Bronze to work as head chef until December 2002. He then returned to his roots and worked as executive chef at the Nordica Hotel until 2007. After signing the famous manifesto of Nordic nouvelle cuisine, Hákon introduced his personal style of cuisine to the Vox restaurant, based around Icelandic products with a few European influences… and sometimes a touch of Asia. His intuition reigns, whatever dish he may be concocting. He decided to promote the lamb and fish produced by his country around the world, and also to spend several months in the wild, in a kind of restaurant-cabin where he welcomed fishermen who had come from all over the world to discover the rivers of Iceland. While there, he extended his creativity to its very limits, through a type of cuisine rooted in the environment.

Nowadays, he owns two establishments: Kitchen and Wine, which is located in the 101 Hotel, and Essencia. But in summer he can still be found on the banks of the river Norðurá, one of the best islands for salmon fishing (his great passion).