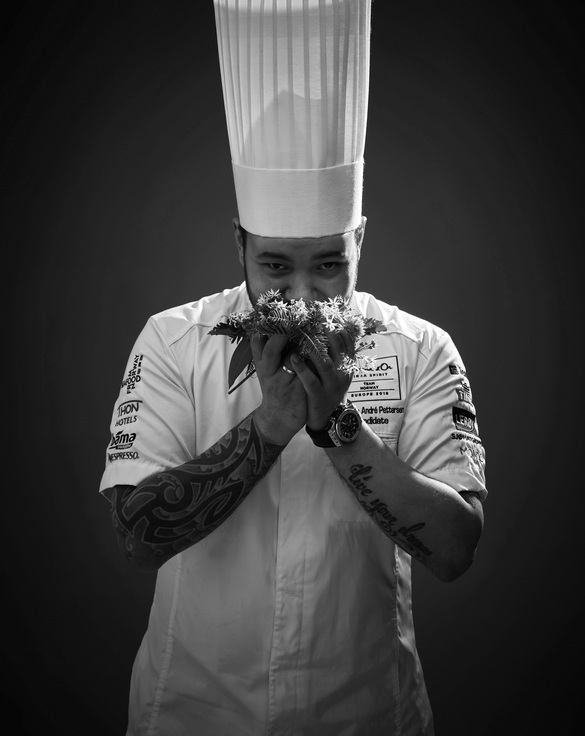 He was born in the town of Bodø, north of the polar Arctic circle: the Far North. And that’s the theme he developed for the Bocuse d’Or. His childhood was immersed in the flavours of the ultra-fresh fish pâtés prepared by his father, a cook, and fried in butter. Alongside these flavours were the ginger and other spices that his mother, Philippine, likes to use in Asian cuisine. From this cultural mix, Christian André draws a magnificent strength expressed through his taste for travel and open-mindedness. He is like a fish in water in his role as chef at the Mondo restaurant in Sandnes. The establishment’s name is taken from Esperanto, and its motto is: “Taste the world”. Although most of his products are sourced locally, the techniques, types of cooking and spices are inspired by the whole planet, and especially Asia.

From his mother, he also learned respect for food and for cooking: in poor countries, you never waste anything, and products are shown consideration.

His father disapproved of his son’s desire to become a cook, but Christian André was quite determined about it from the age of 9, an age when he also dreamed of winning the Bocuse d’Or! He went on to learn a lot alongside Charles Tjessem, with whom he worked for several years.

His passions: fishing of course, wine, which he collects, and more surprising: watches, which fascinate him.

He loves competition, and believes there is no better adrenaline. He has taken part in 24 contests, for which he has won 14 gold medals, 8 silver and 2 bronze!

Prior to the death of his father in 2014, he promised him that he would become the best… and would even win the Bocuse d’Or. To immerse himself at the highest level, he got involved in competition alongside Gunnar Hvarnes and Christopher W. Davidsen. The bronze he won in 2019 left him with a sense of failure, and he is seriously thinking of a return in 2021. His partner Ellen Terese is willing to support him again, so… Christian André managed to keep bronze in 2021 and he is happy.