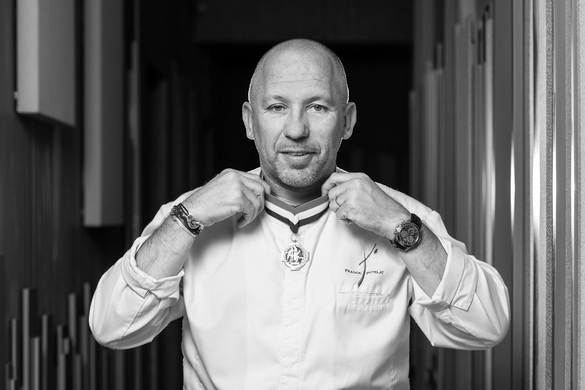 Franck Putelat comes from the Jura and started his career in traditional manner in his region by acquiring the CAP and BEP diplomas. From the outset, he showed a great determination to rise to the top. At the age of only 17, he was hired at the kitchens of the Hôtel de France in Les Rousses. Since then, he has followed a steady ascent, going from the Auberge de Chavannes, Taillevent, under the direction of Philippe Legendre, to Georges Blanc’s restaurant at Vonnas, where he was Executive Chef. This career path has also allowed him to take part in different promotional activities around the world, from New York to Singapore, Peru, Canada and elsewhere. He acquired a taste for competition when he entered a contest for Apprentice Chefs in 1986. In 2003, after entering 12 culinary competitions, he won the Bocuse d’Argent which raised him to the highest levels and allowed him to continue his discovery of other culinary cultures through travelling. In 1998, he became the Chef at the Hôtel de la Cité in Carcassonne. In 2005, he made his dream come true by opening the Parc Franck Putelat in Carcassonne. Their keywords are meticulousness and excellence applied to cooking, decoration and service. Yet, for all his meticulousness, Franck makes a point of keeping passion at the forefront of his cuisine. And that’s doubtless what won him his second Michelin star in 2012. In 2013 he opened a 4* hotel where his guests can extend their wonderful stay. 2016 saw the opening of “A 4 temps By Franck Putelat”, in partnership with his loyal supporter Thomas Brieu. The brasserie’s concept: the 4 phases of the day, the 4 seasons of the year, and the menu is changed every season with a colour code, yellow for Summer, orange for Autumn, white for Winter and green for Spring. That includes everything from logo to staff uniforms via napkins, toilet paper, etc. On July 1st 2016, Franck added 12 rooms to his establishment when he bought the Hôtel Pont Levis located at the foot of the fortess city. In 2019, to his delight, he became an MOF (one of the Meilleurs Ouvriers de France).