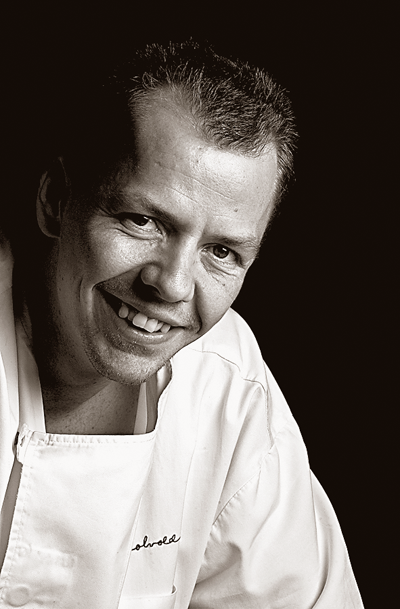 When Odd Ivar Solvold climbed the podium in 1997 to receive the Bocuse de Bronze, it was by no means his first victory in a culinary competition. Since 1988, he had put in a string of award-winning performances; the Silver Medal at the World Young Chef Championships, and the Best Chef of Norway competition, which he has won three times. An active member of the Norwegian culinary team, he is often presented by his peers as the “king of competitions” and enjoys helping others prepare for their own performance, acting as coach to Charles Tjessem, Geir Skeie and Ørjan Johannessen, for example. His mind is wide open to other culinary cultures and he fights to win respect for and improve the quality of products. However, his most satisfying victory was undoubtedly winning the confidence and professional esteem of Edgar Ludl, a kind of godfather to Norwegian chefs who created a renowned gastronomic restaurant at his village on the outskirts of Sandefjord, drawing a constant stream of gourmets from all over Norway. He served as Ludl’s right-hand man for several years before buying the restaurant. Then in November 2009, he sold it to open the place of his dreams: brasserie, café, bakery, wine bar and a culinary studio for cooking classes. The name of this magical place: SMAK, which means Taste in Norwegian, quite simply. In 2013 however, he had to make a choice since he was constantly solicited by clients for his skills as a consultant and, most of all, he would be taking the helm and becoming more heavily involved in the Bocuse d’Or structure in Norway. Since then, he has been acting as a consultant for the industry and for the hotel-restaurant trade, for Ørjan Johannessen among others, and has written a book: Norwegian Fish. And he now has time to devote to his other great passion: triathlon (Ironman) and extreme running.