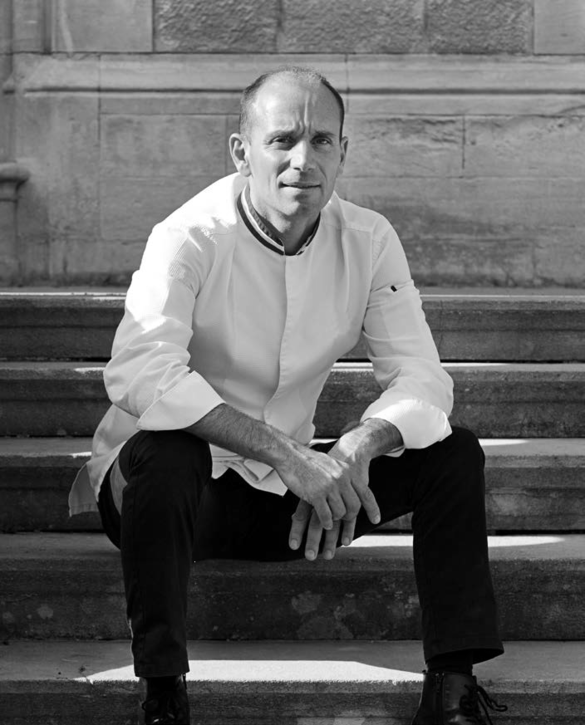 Davy Tissot comes from a family of immigrants and grew up in the Les Minguettes neighbourhood of Lyon, alongside his grandmother, uncles and aunts. “My grandmother was Sicilian and she would get up at 4 am to give her dishes time to slow-cook. Our whole apartment building could smell them, and everything was shared, even with the neighbours.”

His passions? Sport and woodwork. Having never really blossomed academically, he chose to follow the path of sport, only to be forced to abandon it later on due to an injury. But his taste for challenge had been sparked. “I was looking to achieve a goal and excellence regardless of which field it was in.” That field would be cooking, with the goal of becoming Meilleur Ouvrier de France.

After sending in apprenticeship applications to chefs and receiving nothing but rejections, he enrolled at the Vénissieux hotel and restaurant school at the age of 13. His initial steps on his career path led him to caterer and Meilleur Ouvrier de France Jean-Paul Pignol. “To start with, it was torture. They sent me to work there every weekend, given my academic results. But little by little, I discovered a profession that combines rigour, discipline and creativity and that provided me with an opportunity to channel my energy, learn to focus and surpass myself.”

Next, everything happened around a series of meetings... The first hand extended to him belonged to Monsieur Paul. “He was the one who gave me a passion for the profession.” In 1991, he took on a job as commis chef at the Auberge de Collonges where he discovered the restaurant world alongside chef Roger Jaloux. Subsequently, his experience developed alongside Jacques Maximin, Régis Marcon, Jean Brouilly and Philippe Gauvreau. Driven by his competitive spirit, Davy was passionate about contests and always finished in second or third place. Then it was time to set his sights on the Holy Grail. Supervised by chef Roger Jaloux, he practised tirelessly and, in 2004, won the title of Meilleur Ouvrier de France!

“Initially, I wanted to be a MOF, not a chef.” Goal achieved. That same year, Davy became a chef at the Terrasses de Lyon, the restaurant at the 5-star Villa Florentine hotel, for which he won a star in the Guide Michelin in 2005.

In 2016, Dominique Giraudier, director of the Institut Paul Bocuse, offered him an educational role: he became chef at the Saisons restaurant, earning it a Michelin star in 2020. “Saisons became the first Michelin-starred training restaurant in France, and I’m incredibly proud of that for all the teams.”

His cuisine? “I’m interested in the pleasure and emotion that it brings people. I’m sensitive to the human aspect, to sharing, and I could never cook for a person I didn’t like.”

“I’m primarily driven by the desire to create a memory, a gustatory and/or visual emotion.” With solid technical baggage behind him, chef Davy Tissot invites us to join him on a voyage whose only boundaries are deliciousness and visual appeal. Being curious, he is always on the lookout for new approaches and constantly questions himself to find the perfect balance in each dish created.

“The Bocuse d’Or contest is more than a competition. It’s a human, collective adventure. Our complementarity is our strength. You never win anything alone.”