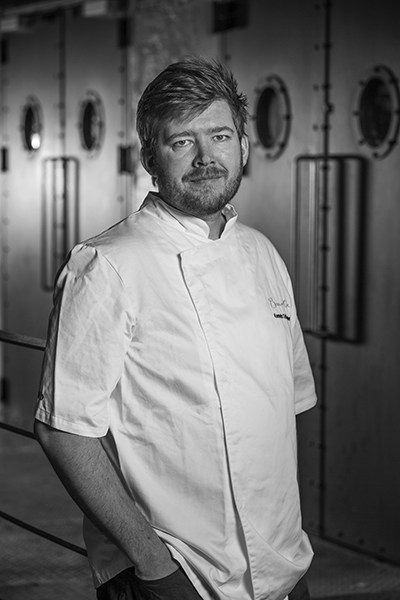 Looking at Kenneth’s career path is a bit like enjoying a surge of positive energy. From the age of 17, he started training as a cook at the vocational high school in Silkeborg. After starting out as a dishwasher at the Christian 8 restaurant, in the same town, he worked relentlessly to become a chef from the age of 23 at the gastronomic restaurant Piaf. He kept training and developing at various Danish restaurants before laying down his hat in heaven on setting foot in Svinkløv Badehotel in the small town of Fjerritslev, in the very north of Jutland, which basically means “in the middle of nowhere” as he likes to point out. There, for six months a year, with his wife Louise (who he met during a TV show that she was hosting as a journalist), he strives to maintain a simple, natural atmosphere facing the ocean: no wifi, mobile phones banned in the restaurant, no TV in bedrooms… and a fabulous cuisine featuring refined simplicity, which changes every day, spotlighting regional products, starting with fish of course.

Culinary competitions seem to have kept his taste for challenges alive: from 2003, he successfully competed in commis chef contests in Denmark and Scandinavia. When he “only” finished sixth in the 2015 Bocuse d’Or, he was hugely disappointed. In September 2016, fate stepped in and the hotel burned down, destroying a magnificent building: everything had to be rebuilt. The Viking picked himself up, encouraged by his wife, and surrounded by a strong team including Francis Cardeneau and Rasmus Kofoed, he once again prepared for the Bocuse d’Or, which he won in 2019! His partner, Christian Wellendorf, was elected best commis chef on that occasion. His takeaway from that experience: most of all the fact of having learned from his mistakes and the huge pleasure and privilege of having been able to devote time to such a venture.

Whenever he finds a little free time, he likes to fish: a way of associating his love of nature and the ocean with cooking.