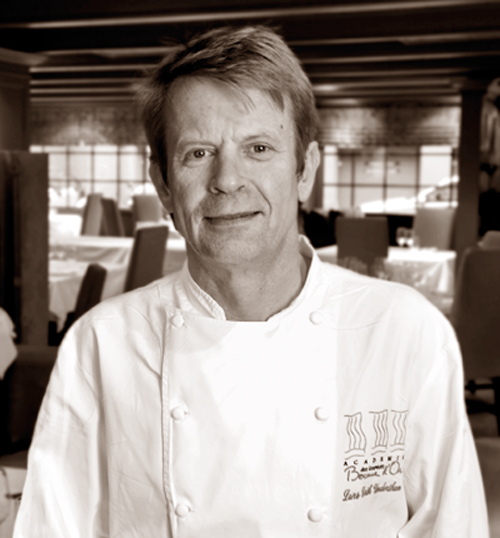 
Lars was the first Norwegian to climb the podium of the Bocuse d’Or, opening the way to a host of compatriots with obvious talents for culinary competition. He shared his success with the Norwegian culinary team to which he belonged for two years. You must visit the Spisestedet Feinschmecker restaurant in Oslo to appreciate his Norwegian cuisine, which draws much of its influence from French tradition. He claims that you can tell a good chef from a bad one by the sauces they cook, so it comes as no surprise that he pays great attention to such delicious details. Another of his stock arguments is the need to respect the seasons; he improvises his menu day by day and nothing pleases him more than a grilled salmon in the country in summer and the sweetness of strawberries picked fresh from the field. He also loves being in direct contact with his guests and is a familiar figure at his restaurant, where he often gives cooking classes.
He also has a high media profile, particularly on the NRK programme: Kokkekamp (the Battle of the Chefs).