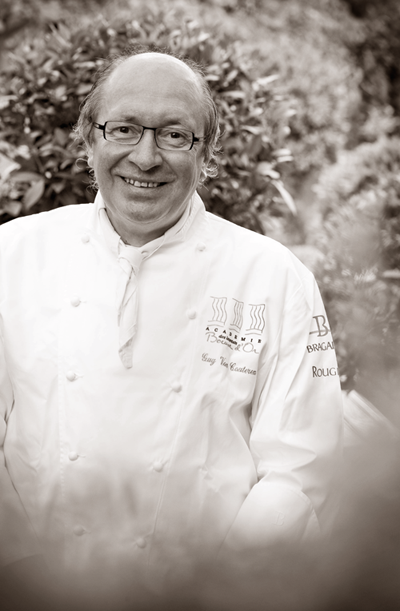 Guy Van Cauteren was undoubtedly one of the best-known Belgian chefs. He came to cuisine via butchery after being expelled from college for his subversive reading material (by Louis-Paul Boon, the “anarchist” writer, notably), but he became a happy and fulfilled chef. After attending the hotel school at Ostend, a stay in Paris with Lucas Carton, and holding the post of head chef at the French Embassy in Brussels, he set up in the impressive family home in eastern Flanders, which dates back to Napoleonic times when it was already known as the highly respected inn, the “Lion d’Or”. His restaurant, “‘t Laurierblad” (the laurel leaf), Michelin 1*, was reputed for its cuisine, which was “solid, just right, and has consigned risky improvisation to oblivion”. However, far from remaining in his cocoon, he cooked on TV shows and also served his profession, presiding over the Flanders Eurotoques contest from 1995 to 2005, and the Master Chefs of Belgium from 2000 to 2003. 2013 marked the start of a retirement that he enjoyed in Knokke, on the North Sea coast, where the fish kept him dreaming, of course; cooking during those days was reserved for family and friends, but still with the same love put into it, day after day. Guy passaed away in December 2020.