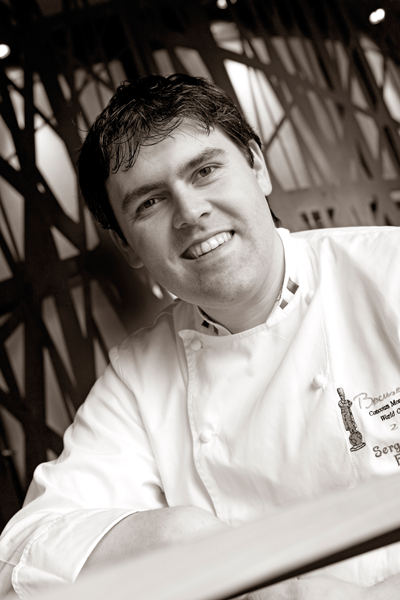 Serge chose his trade primarily because he could indulge in it every day. He had competed only once, when he won the Jean Botio "Auvergne-Quebec" competition in 1997. After that, Régis Marcon, for whom he was working as right-hand man, suggested he try his hand at the National Artistic Cuisine Competition, to experience a test that would force him to go further in his profession and perfect his technique. And he won, making him aware that he should represent France in the Bocuse d’Or 2005! So a several-month marathon of intensive training began, during which he formulated his recipes while listening, of course, to his boss's advice, but also that of a number of young chefs, including Jacques Décoret, Eric Pras, Davy Tissot, and Eugène Hobraiche, who enforced the most exacting rigour. All this effort bore fruit and resulted in him climbing to the top of the podium. Serge then dreamed of opening his own restaurant, and devoted all his energy to turning that dream into a reality. He put this period to good use by teaching and travelling widely, enriching his palette with different culinary influences from Australia to Spain, and so on. In spring 2009, Serge and his wife Marie-Aude, a wine-waiter and consultant, finally realised their dream in the heart of the Cantal at the Château du Couffour, where they express their modern outlook in a historic setting! This modernity is based around the conviction that only the healthiest products should be used. It is certainly that conscience and the implacable desire to do things right that won them a second Michelin star in 2012. With his mind always full of new projects, that same year he bought a hotel in Chaudes-Aigues, transforming it into a high-end hotel with brasserie. 2019 saw the opening of Sodade!