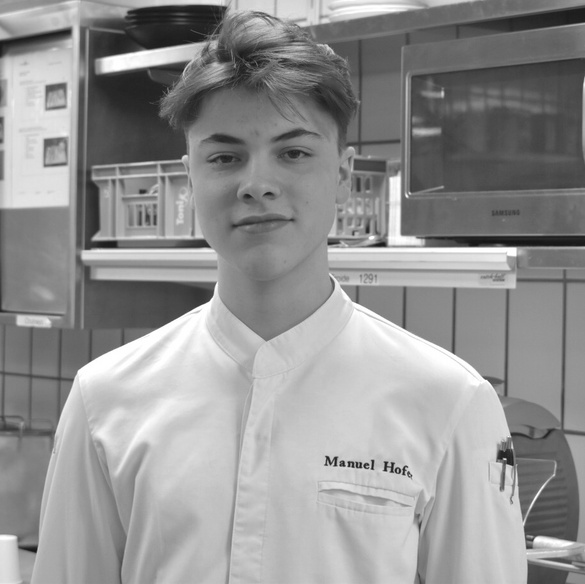 Manuel Hofer discovered cooking at the age of 13 when taking initiation classes at school. He was immediately captivated and, before long, knew that this was the career path for him. He loves all styles of cooking, from the French classics to Tex-Mex!

For his first job as a commis chef he worked in the kitchens of a hospital where great importance was accorded to the quality and variety of meals served to patients, not only for health reasons but to keep their spirits up too. He also took part in a few contests, and would dream as he followed the Bocuse d’Or on the Internet. He was contacted by Ale Mordasini, who was to represent Switzerland in the contest. After spending some time working alongside him, his role as commis chef was confirmed: he would be part of the team, a dream was coming true.

What he remembers from the contest is his heart beating fast for ten minutes before entering the kitchen, and the huge satisfaction of completing the job when the dishes were sent out.

The prize for Best Commis Chef surprised him, but he was delighted to be rewarded for his commitment. It certainly enabled him to make another dream come true: working at Igniv, one of the restaurants belonging to chef Andreas Caminada in Manuel’s home city of Zurich.

One day, he would like to take part in the Bocuse d’Or as a candidate.

His advice to other commis chefs: “Do it with passion. Give it everything you’ve got, and have fun!”