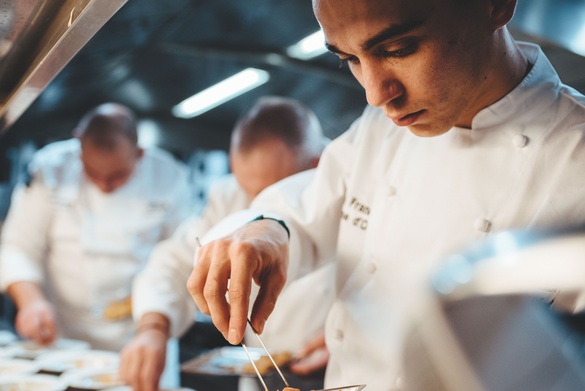 The way Benjamin found himself as a commis chef at the Bocuse d’Or 2017 at the age of 21 reveals quite a lot about his energy and ambition:

“I had dreamed of it for a long time. I was fascinated by the Bocuse d’Or, which I used to follow, particularly Thibaut Ruggeri. When I saw Laurent Lemal win the French selection round, I decided to go and work at his restaurant so I could be alongside him. After the European rounds, he asked me to be his commis chef. I’m still in contact with him, and also with Franck Putelat, Anne Daudin…”

The Bocuse d’Or has become a central part of his life… He dreams of returning… let’s take that as meaning “as a candidate”!

Since this venture, he has kept pushing forward to gain experience. He has worked among others with Arnaud Donckele, and was involved in the opening of the 4 Seasons in Megève.

Then he completed with a brasserie experience, in Saint-Raphaël, to see something else. His curiosity (an essential quality to succeed in culinary competitions) prompted him to travel for several months in Asia with his friend, Caroline Fèvre, who is also working in the world of hotels and restaurants after studying at the Paul Bocuse Institute.

Today he is Chef at Chalet Zanier in Megève.

His advice for commis chefs at the Bocuse d’Or: “Never let anything go, believe in your dreams. Work and keep working…”